Flying out of CPT tonight at 11 pm local time! Here is the final student blog from Claire:

These last two days have been incredible. On Sunday morning we left early to head to the Aquila Game Reserve. It took around two hours to get there, but the drive was completely worth it. We were greeted with some yummy sparkling grape juice before going to the buffet for lunch where they had the most delicious carrot cake I have ever had. Every cake and loaf of bread here is a creation of moist perfection. After lunch, we headed outside by the pool to relax (people watch)… the selfie stick game was very strong with the other tourists. A few people (Jonathan) got a decent nap in before we went to our rooms to prepare for the sunset safari. The girl’s hut was by far the coolest because of the upstairs room that had a roof made of thatch and a window overlooking the reserve. It is a wonder that our roof held up in the night since Jonathan and Edward decided the best way to determine who would sleep in the king bed in their room was to see who could pull the longest thatch stick from the roof of our hut. It did not work out in either of their favors because Brock ended up in the King bed (juniority I guess).

The sunset safari was amazing. It was cold but other than that the weather was perfect. We got so close to the elephants and lions which was so cool since the only other time that would happen is in a zoo and it is just not the same. We learned a lot of fun facts about the animals from our safari guide, Amil, like how fast hippos actually are. The best part of the safari was seeing the lions. At first they were shy, but eventually one lion came down and the rest followed. The first lion was the best because it kept making a noise that could have been a 5% roar or it was just coughing up a hairball.. either way it was cool. When we came back we enjoyed a nice dinner with sub-par Malva pudding (none will ever top Oripa’s) for dessert. After dinner we went outside to a bonfire where some other guests thought they were teaching us the proper way to roast a marshmallow. The best part of the evening was watching numerous stars appear as the sun faded farther and farther behind the mountains and created a beautiful image (see Edward for pic). God’s creation is very easily taken for granted at home, but here with the vast mountains, huge waves, and infinite bright stars it is impossible not to see His greatness. We ended the night with our last devotion for the trip and went to bed since we had an early morning.

I have very mixed emotions about the sunrise safari since over half way to the airport two weeks ago I realized I did not bring my jacket. Despite the cold, the sunrise was stunning and the animals we got to see made it even better. We saw the lions again but this time they were in a much more relaxed state. All seven lions were cuddled up in one spot and some were even laying on their backs like my dogs after a long day of doggy daycare. “Awwww” was said multiple times on the bus until Edward happily pointed out that if we were to step out of the bus we would be breakfast for them. After the lions we saw a group of rhinos, one of which was only seven months old. Naturally,  I wanted to take it home. Jonathan was also excited to see the ostriches. When we got back, we headed straight for the fireplace and once we had thawed out we went for the breakfast buffet. We encountered some raw chicken nuggets, but the pancakes were great.

At last we are on the bus on the way back to the team house. We are all filled with mixed emotions about coming home. Everyone is ready to see their family and mostly their dogs but we are sad to leave this beautiful place. Being trapped in a pressurized flying box for hours on end is also not the most appealing option at the moment. *queue South African accent* See you guys back in the States!

*Picture of the Smiley below (viewer discretion is advised)*

We were sad that there was no Holiday Club today, but we at least got to catch up on some sleep. After a breakfast at 8:00, many of us decided to go back to bed until we had to leave for the day at 9:30. We loaded on the bus with Frans and made one of our final stops at Pick n Pay. I’m pretty sure most of us bought Fizzers, along with other treats to bring back to remember our special time here. After this, we drove to Boulder Beach to watch the hundreds of penguins located there. We then stopped at a local coffee shop to get out of the cold and rain before we embarked to Hout Bay for lunch. Here, we had some of the freshest fish and chips I’ve ever had, explored the shops near the restaurant, and saw a sea lion on the main boardwalk. From here, we headed towards the Hout Bay Market where most of us were able to pick up some souvenirs. Fortunately that was not the only stop where we could do that because we went to the Green Market right after. This marketplace was different though because we could barter here. I ended up snagging a hand-carved chess board and a few things for my parents and sister, and I know that most everyone else did the same. We then drove to Bo Kaap, which is a cool community downtown that is known for the many colorful buildings. After taking a few pictures we drove to Watershed, where we walked around and some of us listened to some live music. It was really nice to sit down and relax after a day full of walking and buying. After some time here, we went to a local mall for about 30 minutes before we drove to Marco’s for dinner. The food at Marco’s was fantastic. We ordered fried goat milk cheese balls, stuffed chicken wings, and many of us tried springbok, kudu and ostrich. Edward ventured out and ordered the smiley, the cooked sheep head. We tried sheep cheek, tongue, and Edward tried the eye of the sheep. After this, we headed back to the team house where we had a devotion, played games and went to bed for the night. We are looking forward to the safari tomorrow! 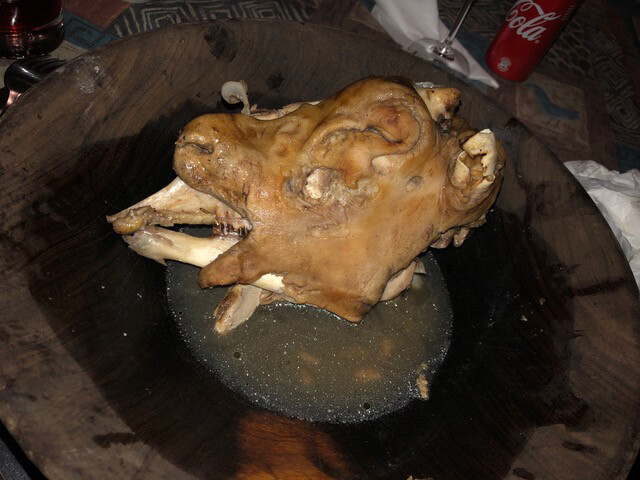