Hello, I’ve bet you’ve been anticipating our next blog since I bet us students aren’t very good at updating our family members (I’ll own up to it). So to start off Thursday morning, we had the most amazing blueberry French toast. We jumped in our bus to watch the sunrise as we drove to Capricorn. We arrived a little late (per usual…) and there was already a line outside the gate. Organized chaos could describe the kids’s holiday club that day.

For lunch, Austin and Franz picked up Gatsby sandwiches, which have either chicken and fish and fries and some awesome sauce on some very good bread. It was definitely a sandwich I won’t forget. After that meal with all the LSE’s, one of them named Lezaundra shared her breathtaking testimony. No matter the circumstance, she always said “by God’s grace” she was still there. Then, we headed to our last teen’s club of the week, where the girls painted nails and the boys played soccer and four square.

After an amazing sunset right outside our house and seeing a beautiful golden retriever run across the beach, we came in for a dinner of pot roast and veggies. To top that, we had the most delicious dessert ever called Malva pudding. I think some people may have had at least 3 servings and it almost brought tears to our eyes. Good news is that we would soon have this dessert the next day. Exhaustion hit us hard and we attempted to go to bed relatively early.

Today, Friday morning, we had yummy cheesy omelets for breakfast. This would be our last day with the kids so our goal was to give it all and leave empty. Today was wonderful to say the least. But, it was so sad leaving all the kids. They get so attached and then knowing you might not see them again is a little hard. One mom had to pry a little girl off of me once club was over, Her name was Tiara and her mom said they had just moved here so she wasn’t feeling very loved. I had absolutely fallen in love with this girl and could have taken her home with me if I could. Saying goodbye to LSE’s was worse since we had all gotten so close this week. Tears were shed without a doubt.

Next we headed to a steakhouse to eat with some LSE’s who were part of the farming sector of Living Hope. We probably waited about 2 hours for a food but it was worth it once we devoured our steaks. For dessert, many of us were blessed to eat Malva pudding once again. The LSE’s loved having this wonderful meal which they don’t usually get to experience.

Here is Karen’s shout out. She ate with us. She got steak and peppermint crisp for dessert. She does a really good Southern accent. She is cool. We like her and we like the way she says hamburger and water.

Once we got back home from this late lunch, it was windy and raining. For some reason that I am unware of, we decided to throw on our rain jackets and venture out into this sand storm. To be honest, we felt like we were in a movie since every minute or so, the sand would come and we would hide behind a rock or in a cave for shelter. A couple times, we thought we would be blown away but we are all here to say we survived. To add to that, during dinner the power went out since the storm got so bad. Currently, we are playing a game called Empire – it’s a test to see if you really know everyone. The past two days were out of this world and we are excited for what is to come. To end with, 307 kids came to holiday club today and we started with 97 kids. Enough said. 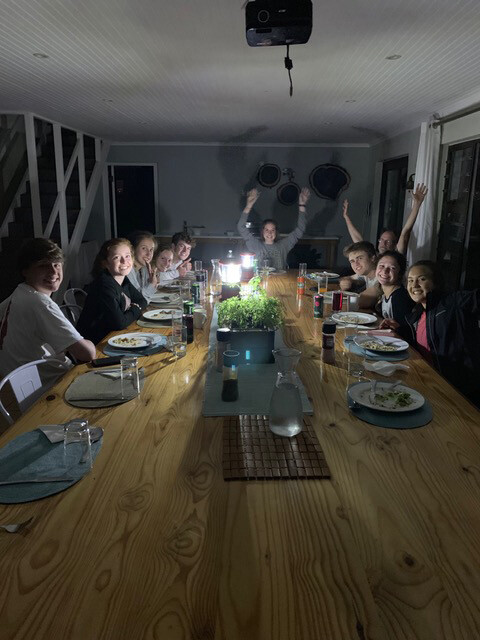